Over 60 Plenaries, Workshops, Sessions and Poster Presentations were offered in the Immersive Learning Research Network’s Campus of VerBELA–a Virtual World!

Full Program Materials Here (Most presenters submitted video versions of their sessions which are now on YouTube. Links are included in the program, and you can SUBSCRIBE TO THE NCSCE YouTube Channel to view!

Information about Attending SSI2020 in VerBELA

The 20th SENCER SUMMER INSTITUTE WAS HELD IN VIRTUAL SPACE! 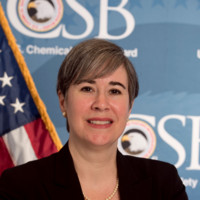 Kristen Kulinowski is the Director of IDA’s Science and Technology Policy Institute, a Federally Funded Research and Development Center. In this capacity, she leads more than 40 researchers providing analysis of national and international science and technology issues for the Office of Science and Technology Policy in the White House, the National Institutes of Health, and the National Science Foundation, among others. Dr. Kulinowski has extensive experience in occupational and process safety, emergency preparedness and response, nanotechnology, policy analysis, and research administration. Previously, Dr. Kulinowski served as a Board Member and acting head of the U.S. Chemical Safety and Hazard Investigation Board (CSB), an independent, non-regulatory Federal agency that investigates major chemical industrial accidents and makes recommendations for incident prevention. Board Members are nominated by the president and confirmed by the U.S. Senate. Dr. Kulinowski is the author of the 2003 SENCER Model course, Nanotechnology: Content and Context, developed while she was on the faculty at Rice University. http://ncsce.net/nanotechnology-content-and-context/ Suresh Venkatasubramanian is a professor at the University of Utah. His background is in algorithms and computational geometry, as well as data mining and machine learning. His current research interests lie in algorithmic fairness, and more generally the impact of automated decision-making systems in society. Suresh was the John and Marva Warnock Assistant Professor at the U, and has received a CAREER award from the NSF for his work in the geometry of probability, as well as a test-of-time award at ICDE 2017 for his work in privacy. His research on algorithmic fairness has received press coverage across North America and Europe, including NPR’s Science Friday, NBC, and CNN, as well as in other media outlets. He is a member of the Computing Community Consortium Council of the CRA, a member of the board of the ACLU in Utah, and a member of New York City’s Failure to Appear Tool (FTA) Research Advisory Council, as well as the Research Advisory Council for the First Judicial District of Pennsylvania.

Lelia Hawkins is an Associate Professor of Chemistry at Harvey Mudd College in Claremont, CA where she teaches courses in the fields of chemistry and climate science, including general chemistry, chemical and instrumental analysis, and global climate change. Since 2011, Professor Hawkins has been engaging HMC students in the topics of air pollution and climate change through her courses and research program. Prior to arriving at HMC, Professor Hawkins spent one year at the University of San Diego as a postdoctoral scholar and instructor. She received her doctoral degree in Oceanography from the UCSD Scripps Institution of Oceanography where she worked on aerosol chemistry and aerosol-cloud interactions. Her current research interests include urban air quality, cloud-phase aerosol chemistry, and the impact of air quality on climate. Link to climate resources on Dr. Hawkins webpage. Adrianna Kezar is the Dean’ s Professor of Leadership, Wilbur-Kieffer Professor of Higher Education at the University of Southern California, and Director of the Pullias Center for Higher Education.  A national expert on change, governance and leadership in higher education, Kezar is regularly quoted in the media, including The New York Times, Wall Street Journal, USA Today, The Atlantic, Boston Globe, Washington Post, PBS, and NPR (national and local stations), among others. At the Pullias Center, Kezar directs the Delphi Project on the Changing Faculty and Student Success, and is an international expert on the changing faculty. She also regularly consults for campuses and national organizations related to her work on non-tenure track faculty, STEM reform, change, collaboration, leadership development, and change.

Kamuela Enos is Director of the newly created Office of Indigenous Innovation for the Office of the Vice President for Research and Innovation at the University of Hawaiʻi. Before taking this position, he worked for 11 years at MAʻO Organic Farms where he served as Director of Social Enterprise. He was born and raised in Waiʻanae on the island of Oʻahu. He received a bachelor’s degree in Hawaiian studies and a master’s degree in urban and regional planning from the University of Hawaiʻi at Mānoa. He sits on the boards of numerous community-based nonprofits, and was a commissioner on President Obama’s White House Initiative on Asians and Pacific Islanders. With Dr. Manulani Meyer of UH West Oʻahu, he organized and led SENCER Hawaiʻi’s 2019 Grand Challenges of Gathering into community of transformation.

Plus over 60 Sessions, Workshops, and Poster Presentations for STEM Educators, K-16!

Get Involved in Our Work

There are plenty of ways to get involved in the SENCER community:

Due to COVID-19 SENCER and NCSCE meetings will be on-line until further notice. We will announce new programs in the e-news and in this space.

To donate, sign up for our newsletter, or register for an event go to our NCSCE registration site.